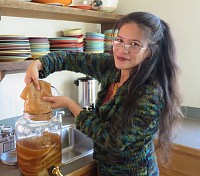 Get to know your brewer

Still reading? You really want more? I'll tell you about my first kombucha experience - I hated it. Several years ago on a hot summer day I stopped at the general store to get a cold beverage. I had never heard of kombucha, but it said mango, and I'll eat mango anything, plus at $5+ for 12 ounces it had to be good, right? I opened it in the parking lot and it exploded all over me, sticky and sickly, I don't remember, maybe I did shake it. That's ok, I thought, it's still a good day! I took a sip and it was DISGUSTING. The closest I could compare it to was one time when I was a kid and accidentally took a swig of nail polish remover thinking it was mouthwash. I brought it inside to the cashier and told her, "I think it's spoiled." She said somewhat condescendingly, "Have you ever tried kombucha before?" No. "Well that's the way it's supposed to taste." (Then no one should drink kombucha ever, I think to myself, and I never will ever again. It was that bad). I was sticky, hot, poorer, still thirsty, and now with a bad taste in my mouth. I just wanted some paper towels if they had any, and she refunded my money without even asking. I refused to drink kombucha for a few years after that, even refusing to know anything about it. Did not know about the probiotics or health benefits, did not care. I would not go near kombucha for years.

Fast forward, and my friend Jesse Miller was staying at my house for about a month before moving to Brazil. He was learning to make kombucha and put a beautiful jar on my kitchen countertop with this slimy weird thing in it (the SCOBY), with sweetened tea. I was curious about Jesse adding white sugar when he is so health conscious. He explained that the scoby eats tea and sugar, so kombucha ends up with very little sugar remaining. The yeasts consume sugar and ferment it into ethanol, then the bacteria consumes the ethanol to make gluconic and acetic acids, as well as other nutrients and B vitamins. Some people are wary of alcohol content, it's usually 0.5% or less,  far less than non-alcoholic beer or even fruit juice that is a little old. I tend to tell people that it is the same amount of alcohol that you would consume in an over-ripe banana. The buzz that some people report after drinking kombucha is sometimes explained as release of toxins that bind to kombucha, so they are temporarily back in your bloodstream before you excrete them with the kombucha. For me, I feel that after having drunk alcohol the day before, or if I haven't had kombucha in several days, so I believe it. It's a clean and clear uplift though, not the fuzzy or exhausting high like from alcohol. It may also be the effect of B vitamins, or probiotics influencing the gut-brain effect. Kombucha has all the benefits of antioxidants and polyphenols that are in tea, in addition to the probiotics, nutrient acids, and B vitamins produced by the scoby. Caffeine from tea is reduced but may be present, anyone sensitive to alcohol or caffeine should consume with care or avoid. One study cited in The Art of Fermentation by Sandro Katz found that caffeine was reduced to around 25% the amount of caffeine that is in tea.

Back to Jesse's scoby, my kids and I watched it grow, with tentacles reaching down and a film over the surface. It looked disgusting at the time, though now I find it beautiful, so alive! When it was ready, he offered me a taste. No way I said, I tried kombucha years ago and it was awful. He flavored it with crystallized ginger and gently urged me to try it again. I trusted his bright eyes, good heart, and the man who loves good tasting food as much as I do, so ok, one sip.

It was so good. It was that good. (And now I know that the first bottle of kombucha I tasted truly was spoiled.) And now he has a kombucha business in Rio de Janeiro, which is where he moved to after staying with me. (By the way, I've had friends wholikewise had bad experiences with their first kombucha, and I've converted them to loving it by trying mine :-D ! I'm looking at you Philip Tucker and Erik Albert. Erik's wife Rhonda now brews from a scoby I gave her because he keeps drinking all of the kombucha she was buying for herself. UPDATE, Erik and Rhonda are now Kulture Club MV weekly kombucha subscribers.)

Later that year, my dear friend Althea Lowell moved back to Martha's Vineyard after a stint in Vermont where she started brewing kombucha. I tell her I'm ok with it now, even curious. I went to visit when she got back and she asks, do you wantascoby? That's where it really started, her scoby. And I almost killed it with my first batch. She told me to make a tea concentrate, then dilute it with water which cools it down, so I don't have to wait to add it to the scoby. Well, I forgot that partabout dilute and cool down. So I thought I killed it with heat, but it came back eventually, though a little wonky. I also almost killed it another time by storing it in the refrigerator, but again I was able to resurrect my brew. Here I am 3 yearslater, after many batches and experimentation, playing, and sharing with friends who say my kombucha is thebest they've ever had, brewed by the daughters of the scoby from Althea.

For me, it begins and ends with flavor. Every time I decant a batch I taste for quality control (yeah that's it, "quality control"), and I shouldn't be surprised by now but every time it makes me smile. In between, there are numerous health benefits that regular kombucha drinkers report, and that I have experienced. People say it reduces inflammation - I no longer take meds for carpal tunnel syndrome or tennis elbow that used to wake me up in pain in the middle of the night. It is said to be heart protective by reducing atherosclerotic plaques, carcinogens, free radicals. Probiotics in many fermented foods increase positive microbial flora, keeping you regular, aiding digestion, reducing side effects of antibiotics. People mention liver detox, and hangover cure. More than one person has told me that drinking kombucha was the only thing that helped alleviate nausea associated with chemotherapy. On a lighter note, when I drink kombucha at night, more often than not I don't even have morning breath! Some people drink kombucha as a healthy low sugar substitute for soda, juices, and alcoholic beverages - I definitely do not crave any of these other beverages (yet I can also attest that kombucha is fabulous if you want to make fancy cocktails with vodka, whiskey, and am excited to try with gin). Again, flavor, I wouldn't drink it if it didn't taste good. I'm still not a fan of big brands in stores, and I understand it's hard to produce a consistent product on a large scale without modifying the process. That is why Kulture Club MV aims to remain small batch, artisanal, "home brewing" in the traditional method, infusing fresh fruit and herbs, home grown, organic, and ethically sourced, whenever possible (even though I've tried, I can't grow pineapples in New England!!).

And again the SCOBY. The Symbiotic Colony Of Bacteria and Yeast naturalizes to its environment, so every SCOBY is a little different, but the resulting kombucha has the same benefits. Even water picks up on and crystallizes in patterns according to vibrations, good and bad. And tea is sacred. I drink a pint or more of my kombucha every day and in many ways I'm better for it. So maybe the secret ingredient truly is love. And that's why I give away scobys. I'd like a whole lot of home brewers/kombucha drinkers to say this is where it started, with love. You are my people.
Made with SimDif